Kashmiri Rogan Josh, a traditional, aromatic and delightful mutton curry having its origin in the Heaven of India – Kashmir. Tender mutton cooked with a blend of saffron, cardamom, and other aromatic Indian spices will give Kashmiri Rogan Josh an unforgettable taste.

Rogan Josh was basically a Persian dish which was brought to Kashmir during the Mughal Period. It has red colored gravy with a layer of oil over it. Tastes better when served with a Butter Naan, Garlic Kulcha or Steamed Rice.

The main ingredients in this dish are the Kashmiri degi mirch and the saffron. The crushed dry fruits like almonds and cashew add to the taste. Addition of hung curd adds to the flavor.

I tried this earlier but had no success. This time, I was able to match the exact taste of Kashmiri Rogan Josh that I had tried at my Kashmiri friends house. I personally believe that this Kashmiri Rogan Josh is the master of all mutton curries. I have tried many different cuisines around the world and this was the best.

I m a bit lazy when it comes to cooking and so I like to find an easier way. Usually, this dish is slow cooked in a pot but I have made this using a pressure cooker to shorten the time of cooking.

Did you make Kashmiri Rogan Josh? 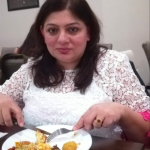 your recipe is awesome, thanks for sharing.