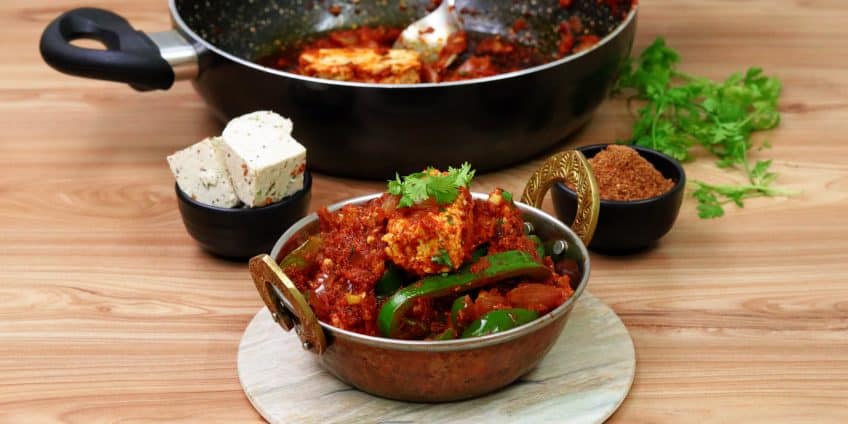 Today I am sharing the chef style Kadhai Paneer recipe. Since it is a chef style recipe, it holds a lot of exciting details. I followed these details and got an excellent result. I suggest you do the same if you make kadhai paneer at home.

So, let’s get started.

The Legacy Behind the Name Kadhai Paneer?

The word kadhai means a vast round metal pot used for cooking over a fire. Now that’s the traditional Indian style of cooking. During the Raja-Rajwada and Moghul times, the royal kitchens had huge metallic pots and vessels to cook royal food. The food cooked in large metallic pots or kadhai is called kadhai pakvan.

The same theory applies to other dishes. For instance, if the paneer is cooked on tawa, it is a tawa paneer. If it is cooked in a handi, it is handi paneer. Since we are cooking this recipe in kadhai hence the name kadhai paneer, the only difference is we will be cooking over a cooktop instead of direct fire. Okay, now, let’s move on with the recipe.

3 Steps to Make the Kadhai Paneer

We are making this kadhai paneer in chef style. Hence, there’s a precise cooking process to follow. The three steps will get you to the final dish. Here they are.

Dry roast the whole spices with salt and then grind to a fine powder. Viola! Your kadhai masala is ready. Store this masala powder in a glass jar and keep it away from direct heat or sunlight. Doing this increases the shelf life of the masala powder.

After making the kadhai masala, the next is to saute the onion and capsicum. Red chilli powder & salt is all we need with 2-3 tbsp cooking oil. Peel onion petals instead of chopping them off into small pieces. There’s a recipe paneer-do-pyaza where we did the same. Further, slit the capsicum vertically and saute it with onions.

The next big thing we are going to saute is the paneer. For your information, I have used masala paneer instead of plain paneer. I already had it in with me. Let me tell you that masala paneer isn’t mandatory; even simple white paneer will do.

Mix everything, saute smoothly and nicely without breaking the paneer. Keep it aside to use later.

The kadhai paneer gravy will be thick. Hence, be cautious when adding water. To make gravy, saute spices and masala powders. Later we will add onion, capsicum and paneer mixture.

The base of the thick masala gravy is tomato puree. Hence, it is a compulsion to cook the tomato puree to eliminate the raw taste thoroughly. Ideally, one must cook until the oil separates. So, once the thick gravy is ready with kadhai masala, add the sauteed onion, capsicum, and paneer mix.

Fold the mixture gently. Make sure the paneer pieces don’t break. Simmer the mixture for a couple of minutes. Your kadhai masala using non-stick kadhai is ready. Garnish with chopped coriander and serve.

Now that we have discussed cooking kadhai paneer in more detail let me write down some valuable tips. Here we go.

Both red and white onions will do. Use either of them, whichever is available. The only thing you need to take care of is not chop the onions but peel off the layers. Then, deseed the capsicum and slit it vertically. That’s it. If you like chopping it off into sizeable pieces, then go ahead. If red or yellow capsicums are available, feel free to use them.

Sauteeing paneer is essential because we will not be adding too much water to cook the paneer. Hence, saute well so that the raw taste in the paneer goes away. If necessary, add a little more oil to have enough room to saute your paneer properly.

Dry roast the whole spices with salt. Doing this will prevent the spices from burning. Additionally, salt will help roast the spices evenly. Hence, follow this valuable tip for better results. One more thing, use a glass container with a tight lid to store your kadhai masala. Seal the cover, so the moisture doesn’t spoil the masala over time.

Instead of chopped tomato, we will be using tomato puree. It cooks faster and saves overall cooking time. Another critical point is to know when tomato puree is adequately cooked? It is when the oil separates.

Now we are in the concluding part of our recipe. Here are some useful queries. If you have doubts regarding the ingredients or steps, then get in touch with us via the comments section.

What is the difference between kadhai masala and garam masala?

Garam masala has a variety of whole spices. Some of them are for fragrance and the rest are for flavours. But on the other hand, our kadhai masala is an essential masala powder with core spices like coriander seeds, pepper, cumin & dry red chilli. Hence, the basic difference is the variation in spices.

Can I substitute kadhai masala with readymade garam masala?

Is it necessary to cook kadhai paneer in kadhai?

It is not a compulsion but since the name is kadhai paneer we have used a kadhai. If you want to make it an earthen pot or handi or even on tawa then go ahead. But then it won’t be kadhai paneer anymore.

So that was our all about kadhai paneer. Now let’s see the ingredients and steps.

Did you make Kadhai Paneer?