Poha Cutlet is a fried snack wherein poha, aka rice flakes are a significant ingredient. Those who are well versed with Indian food, especially the breakfast and evening snacks, definitely know the importance of poha. Rice flakes are heavily consumed by Indians daily in a variety of formats.

The city of Bhopal and Indore in Madhya Pradesh are pretty famous for serving poha as morning breakfast. Not only in the states of MP but poha as breakfast is widely popular even in Rajasthan. Okay, back to our poha cutlet recipe. It’s a non-traditional snack. There’s a reason why I am calling it non-traditional. Shops don’t sell poha cutlets. So yeah, you get poha batata, but there’s no cutlet available made from poha.

However, they do sell regular cutlets made using mashed potatoes. Therefore, if you want to eat poha cutlets, you must make them all yourself.

Okay, no need to worry. Today we will make poha cutlets for you. But, as usual, we will walk through the basics first.

What is a cutlet?

A cutlet is a flat pattie of minced meat, nuts, or pulses, typically covered in breadcrumbs or flour. It is further deep fried in hot oil to make it eatable. Moreover, cutlets are classified both as vegan & non-vegan snacks.

It depends on what ingredients you use to make your cutlets. The most popular vegan cutlet has boiled potato as the main ingredient.

Now that we know what cutlet is let’s proceed to a brief comparison. Here you go.

The only difference between both of them is the main ingredient. That is poha, aka rice flakes. Regular cutlets contain boiled & mashed potatoes. On the contrary, the poha cutlet has soaked rice flakes.

Another difference is the masala powders & spice mix used. The spices & masala quantity depend on an individual’s taste. However, it varies in both the cutlets. Furthermore, the making process is almost similar.

Above all, regular cutlets are readily available at sweet and snack shops. In contrast, poha cutlets are custom-made at home.

Shapes are an integral part of food; we love to eat things that come in different shapes. The same applies to our today’s recipe. I have made heart shape cutlets. For this, I have used a heart shape mould. You can do the same provided you have a mould.

They are available at grocery shops, supermarkets, or where kitchen items are sold. Let me tell you that using a mould is not compulsory. You can make cutlets even without a mould. Hence, if you don’t have one, continue with the next steps.

Using a mould gives a perfect shape to the cutlet. Surprisingly, there are round, square, triangle or star shape moulds other than the heart shape. All in all, a cutlet in a heart shape elevates the mood and tempts you to eat more.

Typically cutlets are round in shape or at the most square with round borders. There’s one essential tip to follow while using moulds. Grease your mould with cooking oil. The mixture won’t stick, and the shape will be perfect.

Things can go south while making a non-traditional recipe. Therefore, here are some queries to help you make the best poha cutlets.

Can we make these cutlets without moulds?

Of course, you can make them without moulds. I have explained the fact already that you don’t need a mould. It is not a mandatory thing. You will need it only if you insist on a particular shape of cutlets.

What else can we add to make our cutlets taste better?

There are two items you can add furthermore. First is the pomegranate seeds, and the second is tutti-frutti. Both of them are an excellent choice. Try either of them. Your kids will love both pomegranate and colourful jellies.

Why there’s peanut powder and sesame seeds in here?

I have used them to give the cutlet a crunchy and nutty flavour. However, you can skip them, but it won’t make a significant difference. On the contrary, adding them will make your cutlets tastier than before.

How long do we need to soak rice flakes in water?

How long will these cutlets stay fresh?

These cutlets will stay fresh for a single day. However, I would not advise you to keep them for an entire day. It is because fried items either lose their shape or become too hard to chew. Hence, do not keep to for a long time. Eat asap.

Did you make Poha Cutlet? 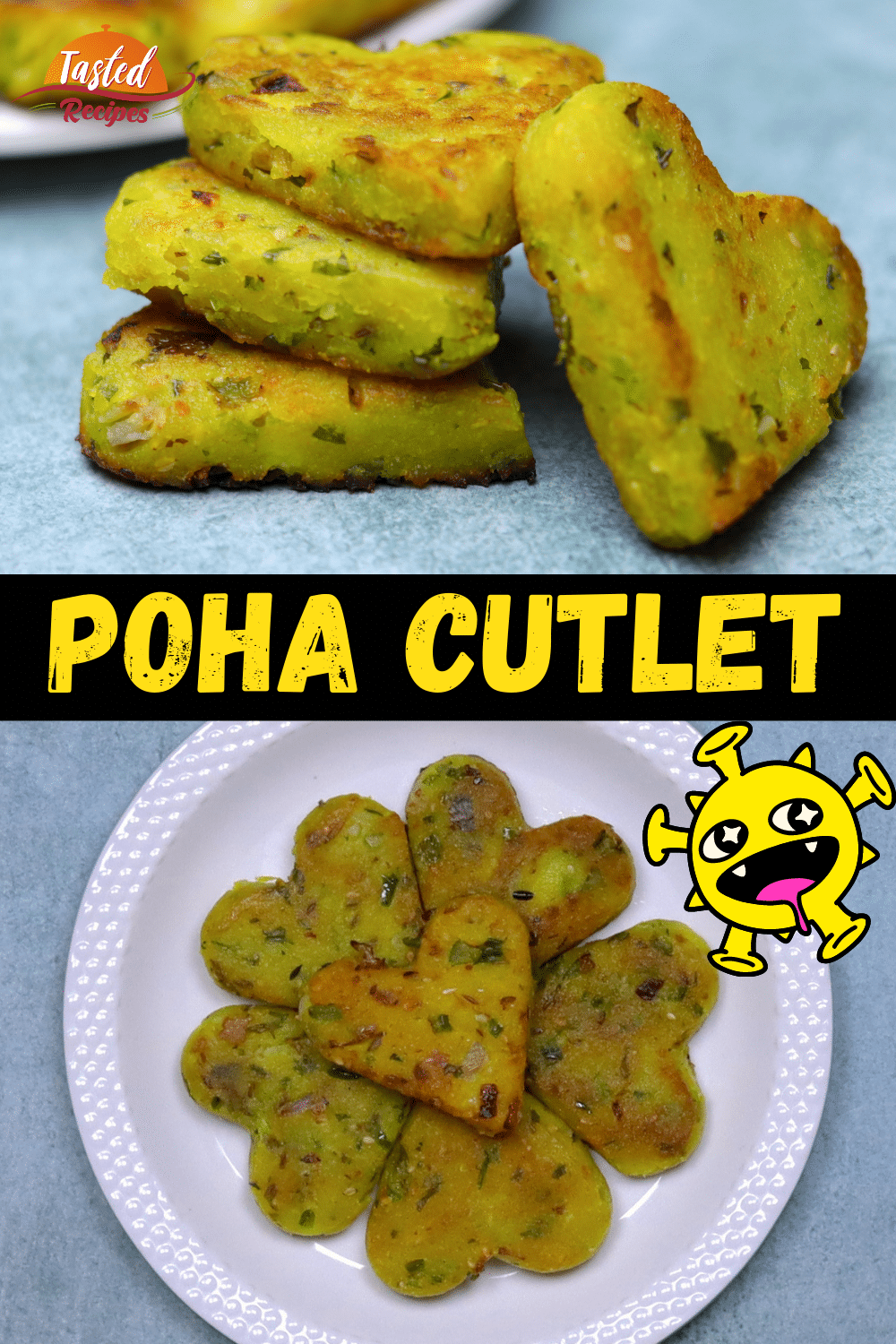